We can only stop Brexit with a huge collective effort.

As the Brexit negotiations and legislation reach a critical stage, Islington in Europe is aiming for a big push to shift opinion among MPs and the general public.

Here’s our 6 point action plan for playing your part…

Need some help writing to your MP?

The email addresses for Islington’s two Labour MPs are:

Here are some useful sample letters:

To help make more of our combined efforts and to keep up the momentum, we’ve set up a series of volunteer circles led by coordinators …

We are starting a writing campaign called Islington Writes to target Jeremy Corbyn and Emily Thornberry in the run up to the parliamentary vote on the final Brexit deal. This is our one big chance to have a real effect on the outcome.

Labour is KEY for this vote, and of course our MPs in Islington are particularly important in forming Labour’s position. Don’t give in to what seems to be inevitable.

Can you help us by writing the occasional letter, email or tweet? The letters you write will be a strong public voice, so our MPs know their constituents feel strongly about the Brexit deal vote and their voices cannot be ignored.

The more their postbags and email inboxes bulge, the more they will notice. Try to give them real, human angles – problems they can get their teeth into – rather than just the familiar arguments from principle

Each Tuesday we will email the week’s rota for MP letter writing, so each person should only need to write once every few weeks. The idea is to maintain a steady stream of letters through to the vote in the autumn.

We have made the writing club as easy as possible to join by asking for only a small time commitment, of perhaps 30 minutes a month, making the club flexible so that you can change/postpone as you need to and by being available to help with letter templates or any questions you may have.

Both Jeremy Corbyn and Emily Thornberry, like all MPs, hold regular drop-in sessions at their constituency surgeries. We need a string of volunteers to go along – one or two people each time – to try and speak to them about Brexit. If you can put to them a real human story about the negative impacts of Brexit, so much the better. 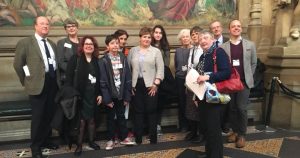 Can you spare maybe an hour a month to go along, and hopefully speak to Emily or Jeremy themselves, or if not them their assistants? We’ll supply you with all the necessary details.

Letters pages – whether in local or national newspapers – always attract a high readership. We need to make opposition to a hard Brexit the normal currency. And for that we need to generate a stream of correspondence. But the impact is less if it’s just the same letter-writer each time. 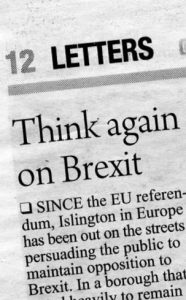 Can you lend your name – you don’t need to have your address published – to a letter or two? We can supply drafts if you’re stuck for inspiration, and email addresses for the different newspapers.

Have you been maddened by the sort of Brexit lies or invective you regularly hear on ‘phone-ins and the like? We must counter the constant drip-feed from Brexit zealots that forms background listening for so many people across the land every day.

Could you pick up the phone – or tweet – to remind listeners there’s another point of view? Even just once – or more often if it takes your fancy! We have compiled a list of contact details to make it easy for you.

Get a copy from luisa.fulci@gmail.com

You have friends all over the country who are desperate about Brexit. But not all of them are in contact with local groups that give opportunities to do something practical. Share our ideas with them!

It’s particularly important to mobilise dormant supporters in constituencies where the MP has a narrow majority and is vulnerable to pressure on Brexit.

Look at our Target constituencies, see if you know people in any of those locations, and encourage them to get active!